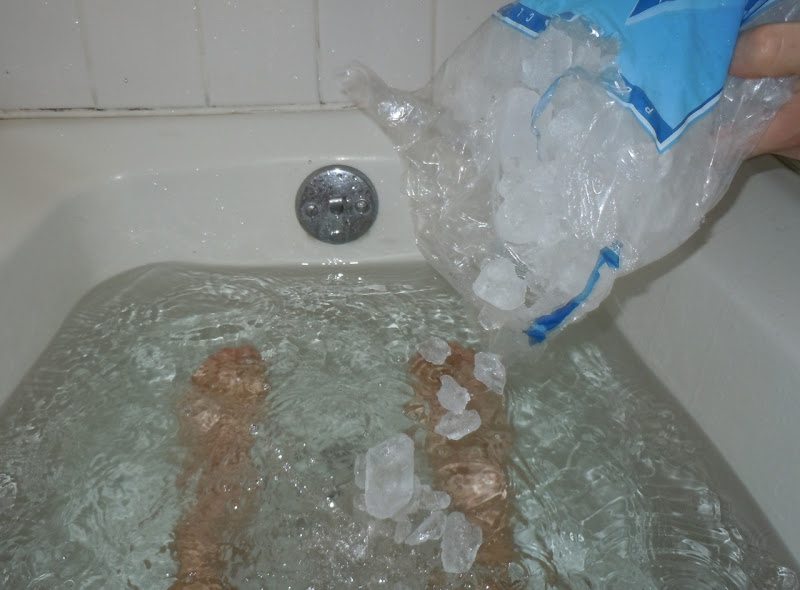 In my racing days, ice baths were THE non-invasive, non-pharmaceutical option to speed recovery after a hard training session or race. My running coach told me to do them and I really felt they helped me recover faster and decrease muscle soreness. In the past 10 years, studies are starting to show that ice baths may impede muscle function. But, the issue is far from black and white.

Athletes at all levels have been standing or sitting in ice baths for decades. I remember sitting in a big vat of ice water in the training room when I had shin splints during my college running career. There were football players, hockey players, volleyball players along with us runners. Most of us had a specific injury that required ice to help control inflammation. It is still the first go-to healing modality with acute injury because ice and cold do decrease that inflammatory “burn”.

The theory behind ice baths is that hard training causes tiny tears in muscle fibers. This muscle damage stimulates muscle cell activity and helps repair the damage and strengthen the muscles, but is also linked with delayed onset muscle soreness (DOMS). In theory, the ice bath, 1) constricts blood vessels and flushes waste products out of the muscles, 2) decreases metabolic activity and slows down physiological processes, and 3) reduces swelling and tissue breakdown. Then as the body re-warms, fresh blood flows through the system, thus improving the healing process.

Claims for what ice baths can do include: reduce muscle soreness, keep muscles limber, repair muscles, reduce muscle and soft tissue inflammation, induce better sleep, reduce muscle pain, reduce muscle stiffness, prevent injury, speed recovery between sessions and feel good after training. Science has not proven all of these claims; in fact some studies have shown just the opposite.

One study in 2007, an Australian study (British Journal of Sports Medicine (1)) on weight lifters threw doubt on the effectiveness of an ice bath. After heavy strength training, subjects who performed three one minute cold water plunges showed no improvement in pain, performance nor a decrease in creatine kinase (an enzyme marker of inflammation and muscle damage.) Some subjects in this study even felt an increase in leg pain the next day.

In a 2006 study of cyclists (European Journal of Applied Physiology (2)), subjects were followed for a 4-6 week period. After each training session, they put one leg in an ice bath and kept one leg out. Researchers found that the non-iced leg gained more strength, circulation and endurance than the ice bath leg. Another study of swimmers in (Journal of Strength and Conditioning Research (3)), found similar results. Ice baths following hard training did not produce improved next day performance or blood tests. They did, however, feel better the next day.

On the other side of the argument, there are several studies that point to the effectiveness of cold water therapy. In a 2008 study (International Journal of Sports Medicine (4)), researchers had cyclists ride 7 days in a row of very hard interval training. After each workout, subjects either took a cold bath, hot bath, contrast bath (alternating cool and hot water) or complete rest. Cyclists performed better in sprint and TT events after cold water and contrast therapy, but performance declined with both hot baths and complete rest. In 2012 (Journal of Strength and Conditioning Research (5)), rugby players were studied during successive games. As with the cyclists, the rugby players’ performance improved with consistent use of either ice baths or contrast therapy.

A study of runners (Journal of Science and Medicine in Sport, 2012 (6)) found similar results in runners completing back to back hard runs. Yet another study of runners (Medicine and Science in Sports and Exercise, 2012 (6)) who ran at steady state followed by intervals, then immersed one leg in an ice bath and the other stayed at room temperature, concluded that the iced leg did show a significant decrease in swelling in the muscles.

Clear evidence supports both sides of the freeze your buns argument. Here are a few things to consider when making a choice about whether or not to take the cold plunge.

There is no one clear answer to this question, at least not one that will fit all athletes in all situations. Most studies were very small and short term. They also studied different athletes, different sports and used different protocols. The bottom line is that if it feels good to you and there is no damage being caused, it is most likely helping you. Stay away from the “more is better” mentality. The water does not need to have ice floating in it to be effective (about 50-60 degrees for 10-15 minutes works fine). And, instead of daily cold baths, do them only after your hardest training days, track workouts, long hilly runs, races in the heat for maximum results.